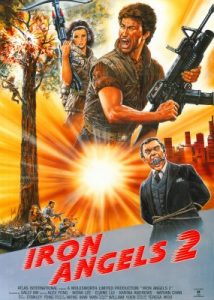 “Iron Angels 2” can be divided in 3 parts. The first 30 minutes are almost a comedy. The 3 Iron Angels go on a vacation to Malaysia, meeting Peter who is a friend of Fong since their college days. Peter has become rich and owns a huge company. They drink a lot, get into a tavern brawl and finally, angel Elaine falls in love with Peter. The second third is a spy thriller. Agent Marco gets killed and Fong’s Iron Angels are asked to keep an eye on Peter who likes helicopter flights into the jungle. The final third is a violent battle: after Elaine is captured, Karen (Kharina Sa) is sent to Fong (with as many weapons as she can carry) to help and rescue Elaine.

The movie is constructed with a method: beginning with happy holidays, it gets darker, heavier, bloodier all the time – until the protagonists feel they’ve been taken to the slaughterhouse. Moon Lee gets her pretty face kicked really hard once. In the way it’s moving towards the climax, the movie is a very effective piece of work, albeit not extremely original.