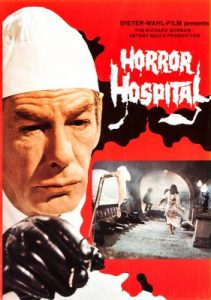 This is actually quite a bright spot in the late 70’s Brit Horror Film Industry breathing its last few gasps. It comes in a few different versions, some bloodier and sexier than others. It actually works in either the softer or hotter versions. The grue– including a nude woman threatened with scissors, a head crushed in a door, a gory fall of a ledge, a woman slashed with a jagged piece of glass, and a nail driven into an eye– is lively, but the central story about the traumatized heroine being cared for by her malevolent uncle and his murderous son is strong enough to stand on its own. There are also the expected scenes of black mass and nude female worshipers. The film plays nicely on our expectations and manages to surprise. With all the garish colors and hazy turn of events, we’re never quite certain if everyone is off their rocker, the heroine especially possibly going off on some flight of fantasy triggered by the accident and exacerbated by the legend of the ancestress witch. Plus, characters you expect to play a pivotal role die suddenly, it’s hard to tell who is trustworthy and who isn’t, and Martin Potter as the cousin vacillates so perfectly between being a morose companion to the girl and a frenzied monster to everyone else that I found myself just as lulled in by him. The violent scenes are shocking and unpredictable, while the talkier sequences have a weirdly cold atmosphere to them. For me, this one gets unfairly written off far too often.