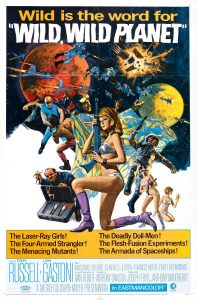 All the makings of a cult classic are here, yet this film is scarcely known to most viewers. In the not-too-distant future, someone is capturing various citizens of earth, leaving no trace. Buxom, bee-hived ladies cause a mild distraction while bald, sunglass-wearing, zombie-like men accost the victims, shrinking them to the size of fashion dolls. The pair then collect the victim’s leftover clothing and skulk away. Russel plays a space commander who makes it his business to solve the mystery, especially when it becomes evident that a curvy Lieutenant (Gastoni) who he loves has become a captive as well. He encounters governmental resistance along with the forces of the party behind the kidnappings as he tries to rescue Gastoni. This film is filled to the brim with wacko, mod 60’s clothing, make-up and hair. Though many of the actors are shown speaking English, virtually all their voices are (awkwardly) dubbed over, giving the film a strenuously cheesy feel. The use of miniatures is highly prevalent and obvious. (One could be forgiven for thinking this is a Gerry Anderson project at first, though Anderson would never allow some of the shoddier effects on display to be used.) The models themselves are okay, but the execution and the filming of them is pretty bad. One scene takes place during the day on the ground and during the night from above! There’s also a red craft that flits around like a dangling yo-yo on a string and makes no sense at all. The vehicles in the film look neat, but can’t possibly be taken seriously when they tend to zoom around slower than most people can walk! Russel is a handsome, but very bland, leading man. He rarely shows any personality or life, but he isn’t offensively bad either. Gastoni has a fair amount of spunk at first, but soon becomes an inert piece of window-dressing. Serato plays a sinister-looking corporate employee with an interest in genetics and does a nice job. The biggest treat is seeing a very young and very delicious Nero as one of Russel’s sidekicks. His role is small, but he’s attractive and valiant. The men carry firearms (literally) that they call laser guns, but which actually come off like cigarette lighters that have been turned up on high! The music score is very unusual, but effective, mostly consisting of metallic hums and clanks. Several hysterical set pieces highlight the film. In one, a man is about to be taken, but the process is interrupted and he emerges as a half-shrunken dwarf, still wearing his full-grown clothes! In another, a (literally!) standing room only theatre shows a horrendous “show” involving a black man and several white women in tights and butterfly wings flopping around to music as the audience stares on, rapt with attention. There’s also an extended, hooty, knock-down, drag-out fight between three officers and three nightgown-clad villainesses. The climax takes place in a massive facility that is flooded with red water, providing a certain amount of excitement. Best of all is the denouement when Russel appears in the teensiest, most snug little bathing suit (while, inexplicably, Nero’s comes up to his chin!), showing off a nice physique that was covered up through the rest of the movie.