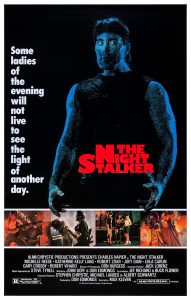 First, to set things straight, the film’s copyright date is 1986, year of release, but video release is 1987. If you are lucky enough to find a VHS copy, there was only one release, and not on DVD yet, and you can find it for just a few dollars, and you’re a genre fan, get it. This was given the go ahead right after the Richard Ramirez murder spree as the Night Stalker in Los Angeles in the summer of 1985, to capitalize on that wave of fear that ran through the city, well-fed by a hysterical news media. It actually has a seemingly unstoppable serial killer preying on mostly street-walkers late at night, whereas Ramirez slipped into homes and killed those in their sleep, a much more frightening premise. The similarity with Ramirez is in name, location, satanic style influences, and that’s about it. Otherwise, the film plays very much like an episode of the TV series, Kolchak, the Night Stalker, with it’s supernatural elements, invincible killer, and TV-movie style of production, plus some cheesy lines, some over-acting, and several good character actors, but without the great Kolchak himself. Charles Napier is an adequate lead, and Robert Z’Dar is a spooky serial killer, check out his photo here on IMDb and you’ll see why. For genre fans who are a little forgiving of the silly moments, it won’t be a waste of time.