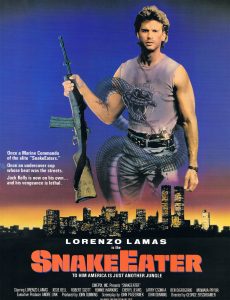 Now, I’ve seen a lot of bad movies. I like bad movies. Especially bad action movies. I’ve seen (and enjoyed) all of Jean-Claude Van Damme’s movies, including the one where he’s his own clone, both of the ones where he plays twins, and all three where he’s a cyborg. I actually own the one where he plays a fashion designer and has a fight in a truck full of durians. (Hey, if nothing else, he’s got a great ass and you almost always get to see it. With DVD, you can even pause and zoom in!) That’s why you can trust me when I say that this movie is so bad, it makes Plan 9 look like Citizen Kane.

It does manage to be unintentionally funny, so it’s not a total loss. However, I recommend that you watch this movie only if you are either a congenital idiot or very, very stoned. I was able to sit through it myself because I needed to watch something to distract me from rinsing cat urine out of my laundry.

It didn’t help much, but it was better than nothing. One point for Ron Palillo’s cameo as a gay arsonist.