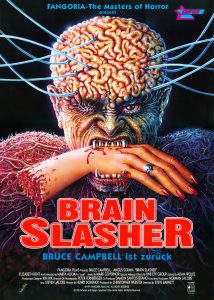 Chaucer this ain’t! Mindwarp is a low budget horror flick that makes no pretensions, and delivers no surprises. Starring the always reliable Bruce Campbell, and a very weak Marta Alicia, the movie is your basic post-apocalyptic romp with monsters, mutants, evil wizards, etc. Higher on the gore content than many of its compatriots, the movie also lacks the tongue in cheek humor that makes some of these flicks fun to watch (Sam Rami’s Army of Darkness comes to mind).

The movie does elicit good performances from Bruce Campbell, who has made a successful career fighting heavily made up extra’s in movies and Rami’s Herc/Xena series. Campbell knows the score and delivers the deadpan hero mode needed to make these pictures bearable. Surprisingly good back up work by supporting actors Angus Scrimm and Elizabeth Kent, doing something with very little in the dialogue department, also add to the film. The one big problem is the female lead, Marta Alicia, who has obviously forgotten that she is no longer in Grade 10 drama, and delivers her lines in a one note (ie. – whiny) tone. Forgetting that her major role is to scream, look frightened, and lose most of her clothing at strategic intervals, Alicia instead appears to be trying to ACT, mainly by looking annoyed and whining a lot.

Overall, the flic ain’t bad. The writing is better than expected, with several plot twists at the end and even a hint of an Electra complex (shades of Freud) along the way. The special effects aren’t, and the budget was obviously stretched in the makeup department, as most of the ‘mutants’ look like trick or treaters wearing Holloween masks from Walmart.