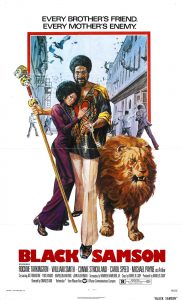 “Black Samson” isn’t anything special in terms of the blaxploitation films of the era; in fact, it’s fairly routine, but it’s still quite agreeable and benefits from some strong performances. Rockne Tarkington, the man originally selected for the Jim Kelly role in “Enter the Dragon” and the star of the TV series ‘The Banana Splits Adventure Hour’, is the cool, calm, collected title hero, a bar owner who works hard to keep crime and corruption out of his neighbourhood. Things get very difficult for him when Italian mobsters try to muscle in on his territory. The main creep is an angry thug named Johnny Nappa (the almighty William Smith, in very fine form), who does everything he can to try to bring Samson to his knees. One’s gotta love a character like Samson: he remains pretty unflappable in the face of danger, and keeps a lion as a pet inside the bar. (Considering the presence of the big cat, it’s rather something of a disappointment that it isn’t worked into the finale. One would expect it to end up chowing down on or otherwise mauling a bad guy.) He also has an incredibly foxy lady friend named Leslie (Carol Speed, “Abby”) and deals with associates such as no-account jerk Arthur (Michael Payne, who’s hilarious). Also among the cast are Titos Vandis (“The Exorcist”) as wise old capo Joseph Nappa, lovely blonde Connie Strickland as white dancer Tina, who takes a shine to Samson and pays a price for it, actor / director / stuntman Joe Tornatore (who, after this, directed Tarkington in “The Zebra Force”) as Harry, Napoleon Whiting as endearing old piano player Henry, and John Alderman as slimy attorney Michael Briggs. Nothing that happens is ever exactly surprising, but there’s still a certain comfort level in watching something (written by Warren Hamilton Jr., based on Daniel Cady’s story) that sticks to a proved formula. The direction by Charles Bail (“The Gumball Rally”, “Choke Canyon”) is efficient, and the movie features a decent enough car chase. The truly rousing thing about the finale is seeing the people of Samsons’ neighbourhood motivated to stand up to Nappa and providing Samson with some very valuable assistance. Then the stage is set for the tough and gripping showdown between tough guys Tarkington and Smith, and it delivers the goods. With a fine and funky score composed by Allen Toussaint to serve as accompaniment, “Black Samson” makes for pretty good, if not memorable, entertainment.