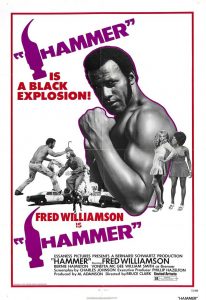 Former football player Fred Williamson does well in his earliest starring vehicle, playing B.J. Hammer, fired from his job as a dock worker but soon finding success as a pugilist. He shrugs off suggestions that the local mob is playing a large part in his success, although the writing is on the wall. His sleazy manager, Big Sid (Charles Lampkin), IS a crime figure who also dabbles in drugs. Eventually, the mob will order him to take a fall in a fight, and abduct his girlfriend Lois (Vonetta McGee) to ensure his participation.

All in all, “Hammer” shows its audience a pretty good time. The director is Bruce D. Clark (“The Ski Bum”, “Galaxy of Terror”), who utilizes some good camera angles and some quick cutting. The action scenes are fine, and there are effective doses of sex and violence to please an exploitation loving crowd. The story by Charles Eric Johnson is straightforward, and uses weary detective Davis (Bernie Hamilton (‘Starsky and Hutch’)), and the love interest Lois, to function as moral centres for our hero.

Fred brings all his athleticism and charisma to the starring role, and receives strong support from Hamilton, Lampkin, McGee, the eternally bad ass William Smith as an incredibly rotten thug, Mel Stewart as a trainer, D’Urville Martin as a pool hall regular, Stack Pierce as a guy named “Roughhouse”, and John Quade as a goon. Leon Isaac Kennedy (the “Penitentiary” series) also makes his film debut as a kid named Bobby.

Set to a pulsing soul score by Solomon Burke, “Hammer” is decent (if predictable) fun that does leave you with a smile on your face.