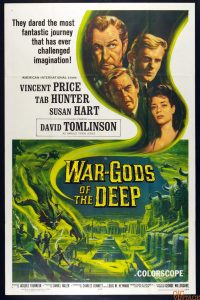 When a body is washed ashore on the coast by a small English village it sparks an investigation in the mind of Ben Harris. He visits the home where the deceased had been a lawyer and finds clues that indicate that the beautiful Jill Tregillis may be in danger. Seeing off a mysterious figure who he caught in the act of stealing a portrait of Jill leaves him in no doubt and he stays the night. In the night Jill is kidnapped and Ben and Harold pursue. Finding a tunnel system going under the sea they investigate but find a hidden world controlled by one man who has found the secret of eternal life but is desperate to prevent his world being destroyed by a volcano.

I taped this film by mistake when I wanted to watch `City Beneath the Sea’ which was on a day after this. Realising my mistake I watched it anyway as I noticed it had Vincent Price and was based on a work by Edgar Allen Poe. The film starts with a bit of a gothic feel to it but quickly it becomes surprisingly straightforward. The mysterious `fishmen’ are quickly replaced as the focus by The Captain and his crew, personally I felt that to make a different species of man and then sideline them was pointless – where they did they come from for goodness sake!?

The Captain and his age-old crew are interesting but nothing can be fully explained as to how they really managed to set up down there as well as they did and it quickly becomes just a bunch of men living in caves as opposed to a city beneath the sea! There is no real feeling of mystery here and the end result is that it falls a little flat for the most part. The attempts at escape late on in the film lose excitement due to being quite slow and filmed in clunky diving suits, happily the return of the fishmen add some fluidity to events. The underwater filming is quite good considering, although the regular close-ups of the actors’ eyes in the helmets would only convince a child that they were really in the water!

Price is always a good villain but here he lacks threat – even when he executes people, he seems to be in full control but without that masterful stroke of eccentricity that many of his better performances have had. Hunter is quite a dull lead and even seems out of his depth (sorry) when acting alongside the support cast, let alone Price! Hart is pretty and Tomlinson adds value with some comic touches (especially at the start of the film). An actor as well known as John Le Mesurier shouldn’t be wasted but really is – he still has to give his usual pottering character but is still badly cast and underused. The fishmen are suggested as the monsters of the piece by the first 10 minutes but are revealed to be toothless, given little screen time and handled as easily as a hooked salmon.

Overall the quality of the film can be summed by the fact that the drama is all relying on the audience accepting a very active underwater volcano of the English coast. However once you get past this the delivery is quite flat and lacking in excitement to the extent that, by the time things come to a head, you’ll not really be that bothered what happens.