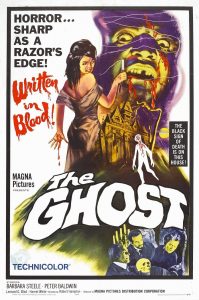 This film perhaps holds up better than the first Dr. Hitchcock film and can be seen with or without that film. It stands on its own. A good film for people to be introduced to director Freda’s work with. It gets better with repeated viewings and the music score is very good. This is not, just as none of his films are, a supernatural movie. So just know that going in. The film still has a good Gothic feel to it. Sadly there is no really good DVD release version of the film. There is a key and very graphic murder scene that is either cut down or cut completely out of several versions available. Without that being intact the impact of the later part of the film is really reduced. Think about Psycho if you basically cut out the shower scene. Not that this is in Psycho’s league but this scene I’m talking about really makes this film work. It would be nice if Freda’s films got a box set release of proper versions of his film. He started Mario Bava’s career and Argento says Freda had more of an influence on him than Bava was. For now you have to really look hard and watch pretty lousy versions of his films to try to discover him as a director. It’s worth the effort but would be nice for him to get some decent releases.