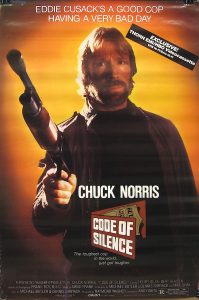 Eddie Cusack, Chuck Norris,is both though and honest. During an impending drug raid on the Comacho mob by Cusack’s undercover crew their interrupted by the Luna mob who kill eight Comacho gang members.

Luis Camacho, Henry Silva, the head of the Comacho mob vowed revenge and a full scale gang war erupts in Chicago. During the police raid officer Cragie, Ralph Foody, shoots an innocent boy down in cold blood and then plants a gun on him to cover it up. In full sight of his startled partner officer Kopalas, Joe Guzaldo.

With most of her family murdered by the Comacho mob, Cusack rescues Diana Luna, Molly Hagan, and hides her with a friend of his Ed Pirelli, Allen Hamilton, until he can get her to the safety of the police. Meanwhile at the police hearing of the shooting of the boy by Cragie, Cusack testifies that he wrote a memo some time ago that Cragie should be taken off the streets. Cusack says “30 years on the streets is too much for anyone” plus he saw that Cragie was not only a threat to those that he dealt with but also to his fellow police officers.

The Comacho mob finds where Cusack hid Diana and after murdering Pirelli who was hiding her takes her hostage. Cusack going to the Comacho mob headquarters calls for backup but his fellow policemen let him go at it alone and don’t come to his aid since he broke the “Code of Silence” in regards to taking against a fellow police officer. Cusack gets brutally beaten by the Comacho mob and is told that if he doesn’t bring them Diana’ father Tony Luna, Mike Genovese, she’ll be dead by morning.

Cusack finding out that Tony Luna is arriving at the Chicago train station from Wisconsin where he was in hiding tries to arrest him. In a wild shootout and car chase Luna is killed in a car smash up as Cusack was chasing him through the city streets. With nothing left for him to negotiate for Diana’s life and with his fellow policemen treating him as a leper an not coming to his aid Eddie Cusack is now left to take on the entire Comacho mob by himself. In a last and desperate attempt to save Diana’s life.

Chuck Norris’s best movie by far with more story and less action then Norris movies usually have. Few as they are the action scenes are far more effective and exciting when they come on the screen. Because of the much more superior writing they don’t come off cheap and monotonous like they usually would in a Chuck Norris action movie.

With great heart stooping shoot-outs in the beginning and end of the movie and an exciting and terrifying chase on top of the Chicago El Train in the middle of the film makes “Code of Silence” with out a doubt Norris’s best movie ever. Norris’s acting has also improved when he’s directed to talk more and fight less which director Andrew Davis allowed him to do.