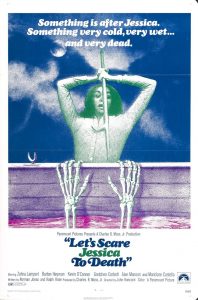 This is one of those rare gems that never got the accolades from the mass public other horror films (Halloween, Friday the 13th, etc) garnered. I saw this as a kid and it scared the bejesus out of me. Some 30 years later, I still love this film. Dated, yes, but it possesses a strange creepiness that you almost can’t put your finger on. Its premise is of a man and wife starting life anew in a small town. The wife Jessica, played wonderfully by Zohra Lampert, has recently recovered from a nervous breakdown. They decide to move out of the hustle and bustle of the big city to a small apple farm and bring their friend with them. From the onset, Jessica clearly struggles with her past demons and tries to convince herself that her mental breakdown was in the past. She starts to question everything she sees as to whether it’s real or not. They get to their new home, only to find a strange girl occupying their property. The girl, Emily, played by Mariclare Costello, is truly frightening and plays the role of this mysterious girl to perfection. To anyone under the age of, perhaps 35, this movie will most likely do nothing for you. It is from the 70s and IT SHOWS, it contains no CGI, no bloody slasher gore, no “strap them down in a chair and torture them” scenes, and no famous big name people. It is a quiet, intense ride where you have to actually FEEL the emotions that grip Jessica. I’ve read comments here where others think it’s lame, or complain about Lampert’s clothes. How clothes can affect someone’s view of this movie floors me, but whatever. This movie isn’t lame. It’s a classic gem of a thriller in a sea of garbage that’s churned out by Hollywood these days. I think I’m going to go watch it now!