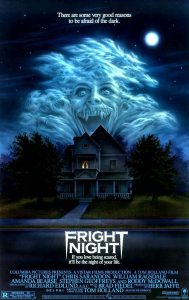 Although the beginning is a bit cheesy and reminiscent of stereotypical horror B-movies, it soon becomes clear that this is part of what makes Fright Night so original. All the typical horror film genres are there: horror, romance, comedy (well maybe comedy isn’t a typical horror element); but what makes this horror flick stand out a mile-and-a-half from the rest is that it’s a very offbeat tale. It’s creepily cheesy but gets away with it because it’s atmosphere is so good.

All this and I haven’t mentioned the acting or special effects yet. Sarandon seems to give such an effortless performance as the vampire and as a result is almost perfect. I had thought of what a modern day vampire would be like before I saw Fright Night; but Jerry Dandridge just blew all these ideas away and has to be the coolest (and I don’t often use that word) and sexiest vampire ever, and is one of my favourite movie villains. Roddy McDowall can’t hold a candle to Sarandon but is still very good, and Stephen Geoffreys is one of the funniest and memorable movie characters ever to grace a film screen too.

The special effects are good for 1985 and unlike where in modern films the SFX are the main point in the movie, here they add to the already present chilling atmosphere. And although on the one hand, Fright Night is quite dated, it also captures the atmosphere and the essence of the 80s. The soundtrack is excellent for the film, but paradoxically not very memorable (apart from one or two good songs).

[I wish I’d been born before 1981 (maybe 1961) so that I could have lived in the late-70s and 80s, and would have memories of the best music from that time, and not the boybands/Beatles clones/dance ditties (not decent tunes mind) we have now.]

All in all an (almost) perfect film: watch it and you’ll (most likely) enjoy it and watch it again and again.