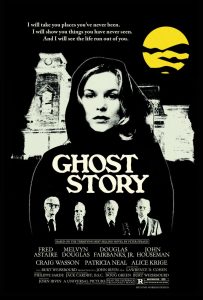 The cast alone makes this film worth viewing at least once. It is always pleasing to see distinguished veteran prayers get together for an effort such as this one. In this sense it reminds me of 1982’s House of the Long Shadows. Douglas Fairbanks, Jr., Melvyn Douglas, John Houseman and Fred Astaire are the aforementioned players and Craig Wasson, Alice Krige and Patricia Neal are among others in a first rate cast. Taken from a novel by Peter Straub, Ghost Story suffers the fate that many ghost stories put to film do in that it has lost much of the mood and nuance of the written word. Still, Ghost Story is a fine film and very enjoyable if you remember that it is not a masterpiece and do not expect more than it can deliver. Four elderly gentleman, the entire membership of the Chowder Society, get together periodically to share ghost stories. It is indicated early on that these gents have been doing this for a long time and quickly we learn there is a sinister reason why. We do not learn until well into the film what that reason is, and the leading up to it is the meat of the story. Set against a wonderfully atmospheric New England backdrop, it is revealed too late for the distinguished membership of the Chowder Society the four had accidentally murdered a young girl they were all smitten with 50 years earlier. The girl, brilliantly played by the enigmatic Alice Krige, has come back in the form of a ghost to exact terrible revenge. Ghost Story ends with several of the Chowder Society members dead and the secret of her death revealed.

It is a pity that this film cannot be viewed as Straub wrote the story, but that is the chance one takes when producing a ghost film, the main reason why there are precious few truly good ones. Ms. Krige, more than any woman I have ever seen on screen or indeed, known personally, combines an earthiness and elegance in her being that is fascinating. It is she that establishes the mood of this film and that is saying a lot, considering who she was cast against. Ghost Story is almost biblical in it’s vengeance to the second generation, Craig Wasson as the son of one of the society members. It is interesting to note the presence of Melvyn Douglas, who starred in horror films such as The Old Dark House and The Vampire Bat in the early 1930’s and in 1979’s The Changeling in addition to Ghost Story. What a way to bookend a rich career! We didn’t get to see enough of Doug Fairbanks, as his character died early, and John Houseman added his usual solid performance. Fred Astaire had the most screen time and his character added much needed touches of light comic relief. Patricia Neal as his wife had little screen time. It was Ms. Krige who carried the film and if you are not familiar with her or her body of work, you should be. She is unique and vastly underrated.

Catch this one on video late on a cold, snowy night, best with a tumbler of brandy in hand. Expect an interesting if not great film and savor the screen presence of the performers. When a group such as this comes together for any kind of film, it is worth viewing at least once. Ms. Krige makes many of the scenes truly frightening, but mainly Ghost Story is to be appreciated for what is, a tribute and last hurrah for several screen legends.