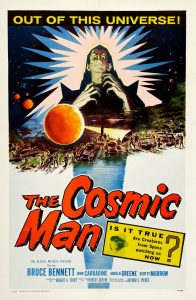 If THE DAY THE EARTH STOOD STILL (1951) had incorporated an even stronger and prolonged philosophical discussion and a more balanced authenticity to human nature, THE COSMIC MAN could have been a stellar, sci fi heavy weight. However, with an apparently low-budget and stilted acting, the surprisingly powerful script from Aurther C. Pierce contains some of the most thoughtful and serious attempt at a balanced look at a CLOSE ENCOUNTERS OF THE THIRD KIND (1997). Perhaps an even closer, contemporary version would be the hard to find WAVELENGTH (1983) without the gorgeous music. Nevertheless even with the stock performances there is a sincere attempt in this message-movie to avoid strong stereotypes and present a substantive sci fi movie with an emotive underpinning rarely experienced in many sci fi movies in the past or even today. A consistent script, logical and emotionally potent in its concept as well as some fancy jargon that attempts to present out of the box, imaginative thinking as with SPHERE (1998).