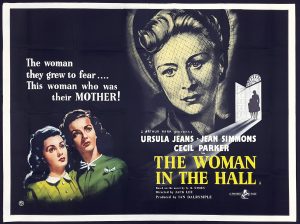 Splendid concoction of the complications women sometimes end up with in their difficult dealings with reality as a tricky means of survival if once the men are out of their lives. It so happens that two men oblige these three drifting women with actually offering them their support and even marriage, which certainly no wise man would do in this case. The mother is a professional cheat, and her daughters are ruined in the trade, one of them (Jean Simmons) actually stealing from her employer and benefactor not realizing it is wrong, since she uses the money only for the good of others. Cecil Parker marrying the cheat is as awkward as ever, he never seemed to get any character right, but here at least he succeeds in turning a bleak story to almost a comedy. I love the scene in the restaurant, when suddenly the cheat of a mother together with her newly wedded husband (Cecil Parker) is confronted with the vengeful brother of the man who once deserted her and now intends to marry her daughter, who is also present, with her godmother, one of the benefactresses the mother has cheated. All these victims of her artfulness never seem to mind her tricks much but are pleased to recognize her swindle for what it is and make the best of it, to ultimately direct her out of her trade. The final court drama is a wonderful climax to this spicy confusion of intrigues and people involved in them, and the judge seems to enjoy it. Fascinating film, resembling no other, and it’s an especially interesting study of women.

Ursula Jeans is marvelous in the straightness of her unhesitating continuous deceit. Note the very young Susan Hampshire as Jay in the beginning as a small girl.