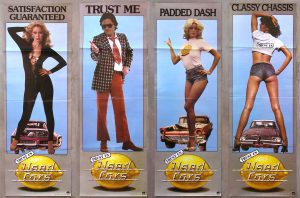 USED CARS was director Robert Zemeckis’ follow-up to the sweet, sentimental I WANNA HOLD YOUR HAND, and, as he joked in his audio commentary, he wanted to cut loose, swear, and do something supremely tasteless as a follow-up. He succeeded magnificently!

This is a wild tribute to corruption, deceit, and dishonesty, in a field second only to politics in tarnished reputations! Kurt Russell is the crooked head salesman in a broken-down car lot, saving money to buy a seat in Congress “where the really BIG kickback money is”. His boss, sweet-natured Luke Fuchs (Jack Warden), has a bad heart and a twin brother, truly nasty Roy Fuchs (also Warden, who is wonderful in the dual roles) running a competing used car lot across the highway. Evil Fuchs NEEDS his brother’s dealership, as a state highway is about to be built over his lot, so he has an employee pose as a customer, and ‘try out’ one of Luke’s cars with the old man in the car. After the test drive from Hell, Luke stumbles inside his trailer, and dies from a heart attack.

Russell realizes any hope to raise enough cash to run for office would be shattered with Fuchs’ death, so he and his fellow employees bury the old man and his car in the lot, and fibs that Fuchs had left town on vacation. Then Fuchs’ daughter, Barbara (Deborah Harmon) arrives, and things get sticky!

The film becomes a live-action Warner Bros. cartoon, as ‘good guy’ Russell and ‘bad guy’ Warden try scheme after scheme to ruin the other…Warden offers a carnival in his lot, Russell offers strippers…Warden does TV commercials, Russell brings in two disreputable cable guys (‘Lenny and Squiggy’ Michael McKean and David L. Lander) to break into a Presidential address with an ‘R’-rated ad that would leave the FCC in apoplexy! This insanity builds to an epic climax, as hundreds of junkyard cars, driven by Driver’s Ed students, race to fill Russell’s car lot, and prevent a court-ruled closing.

The cast is matchless; in addition to Russell, Warden, and Harmon, outrageous humor is provided by Gerrit Graham (who gleefully shotguns Warden’s cars in another ‘illegal’ TV spot), and Frank McRae, as a mechanic you DON’T want to disagree with. And don’t forget a certain dog, who outperforms nearly everyone in the cast!

This is the ONLY ‘R’-rated film Zemeckis has ever directed (the BACK TO THE FUTURE trilogy and FORREST GUMP are among his later triumphs), yet USED CARS was a commercial failure when first released, despite rave reviews. AIRPLANE! came out at the same time, and, unfortunately, the public wasn’t interested in watching TWO ‘over-the-top’ comedies. So USED CARS languished, until video and dvd reintroduced it to a new generation.

It’s growing status a a cult classic is perhaps the BEST proof the “Crime Pays” in USED CARS!