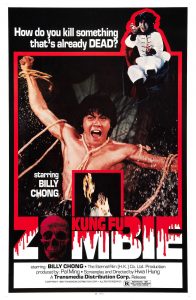 Like other reviewers said, Kung Fu Zombie lives up to its title, but other than the character of the vampire, it doesn’t go beyond expectations. A rating of a 5 is usually used in the case of a boring and mediocre film, but Kung Fu Zombie is not. It goes insanely back and forth from being a genuinely bizarre (and entertaining) zombie story and kung fu movie, to a pathetic attempt at film-making. The production of the dubbed version is way below kung-fu-film average, with numerous jumps in the plot (which is so ridiculous it’s almost dull), hopeless attempts at vaudeville-style humor, and problems in pacing which sometimes makes it hard to sit through. Many of the attempts at humor fail completely, and most of the laughs will come from what is meant to be scary or strange. At the same time, though, Kung Fu Zombie has that insanity and originality that makes it a “good bad film”. For example, a drawing on the outside of a jail shoots lasers out of its eyes at a zombie- because, of course, zombies can’t enter jails.

The fighting in Kung Fu Zombie is surprisingly good. Billy Chong is a terrible actor, but a great athlete. The editing throughout the film is confusing and convoluted enough to ruin several scenes, and although it’s noticeable in fight scenes, it somehow doesn’t manage to ruin them.

It’s hard to pin down an audience for Kung Fu Zombie. It might not be best for kung fu fanatics; those who prefer the serious type of kung fu film will abhor it. Probably many of its viewers are people looking for a fun zombie movie (The mainstream 70’s zombie flicks had little or no influence on Kung Fu Zombie- 100% Hong Kong horror), or those who are amused by the title- these are the people who are most likely to enjoy it.