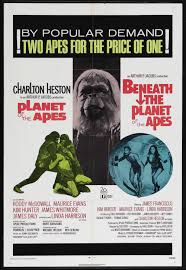 As an avid fan of the original Planet of the Apes, I had always avoided the sequels (though unfortunately not the remake), thinking they’d be so cheesy that they would harm the greatness of the original. I finally got around to the first sequel, Beneath the Planet of the Apes, and, frankly, I’m surprised at how good it is. I’m a big fan of corny ’70s sci-fi anyway, and Beneath is certainly cheaper and goofier than the original. But its themes and ideas are surprisingly intelligent, and it creates suspense and excitement very well. It also expands the mythology of its universe, which is always a positive to geeks like myself. I’d say the only big faults are the much smaller budget, which causes the ape makeup to appear much less convincing than it originally was, and the casting of a Charlton Heston impersonator to play the lead. The story is that James Franciscus is another astronaut looking for Heston and his crew. And since he eventually does find Heston, I don’t understand why they wanted someone who looked so much like their original star.