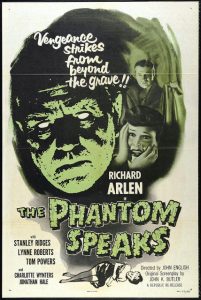 “The Phantom Speaks” (1945) is a Republic gem. Stanley Ridges has a major role as a doctor of the occult. He sets out to show his future son-in-law Richard Arlen that communication with the dead is possible. To accomplish that, he encourages a man with a very strong will to “return”, and that’s convicted murderer Tom Powers who is about to be executed.

Director John English provides some fine noir touches. The story is itself a noir tale, competitive with the Universal Inner Sanctum stories. Powers is an homme fatale. Ridges played a somewhat similar role in the 1940 “Black Friday”. In that one, he changed back and forth between being a professor and a criminal. Here, he doesn’t change physically but Powers has a controlling will.

This kind of film is very enjoyable. It doesn’t attempt to send big messages or provide big thrills. It’s unpretentious and easy to take and digest. The look of it, including some sets and some exteriors, is attractive.