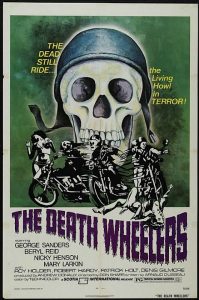 Strangely enough, though I knew of this film, I was under the impression that it was a bottom-of the-barrel horror outing – however, Leonard Maltin shared my eventual rating of it (and even Leslie Halliwell seemed bemused by what it attempted to do)! Anyway, with a memorable title like that and the promise of zombie bikers (not to mention the talents of director Sharp and stars George Sanders and Beryl Reid), the film was irresistible; ultimately, I was genuinely surprised by how enjoyable the thing turned out to be – and, for all its intended grimness, it was often hilarious (whether intentionally so or not).

The plot is pure nonsense: it’s said that people who have a strong will to live are able to come back from the dead – a frog, then, somehow figures in the resurrection rite (a ring bearing its symbol is even borne by butler/demon Sanders – his reaction to a cross offered in gratitude by a well-meaning group of mourning clients, which causes him to blow his cool, is wonderful: incidentally, Telly Savalas would play a similarly ambiguous figure in Mario Bava’s LISA AND THE DEVIL [1972]!). The protagonist is the biker son of medium Reid; he wants to impress his gang (prophetically named “The Living Dead”!) and, fully knowing of his fate (and its aftermath), attempts a death-defying stunt; when he turns up again after being buried mounted atop his motorcycle (his resurrection sequence – with the noise of his unseen machine revving up beneath the earth and then fully emerging witnessed by a man who happens to be passing through the graveyard is priceless), he persuades some of his cohorts to follow suit – a girl manages the trick but one other boy hesitates at the last minute and, consequently, stays dead!

Now, all the gang want to join in – leading to an amusing succession of ‘fatal’ accidents: one jumps from a bridge above a highway into the traffic below, another drowns himself by tying a huge chain around him, one leaps from a plane sans parachute, yet another nonchalantly jumps from the window of a tall building when a Policeman demands a word with him!; however, the anti-hero’s girlfriend isn’t ready to live in an unnatural state and fakes her own suicide. The Police – clueless as ever – think of using her as bait: the sight of four coppers inhabiting the morgue slabs, lying in wait for the body stealers (curiously enough, the name of an earlier but much less enjoyable George Sanders sci-fi film), is side-splitting! Since the cyclists are now impervious to pain, much less having a conscience, they wreak havoc on the streets and inside a supermarket – again, one of the priceless moments is when a baby carriage is mercilessly mown down in the ensuing fracas. Eventually, deeming the gang to have run way out of control, Reid is willing to relinquish her pact with the other side – which promptly turns her into a frog! – and we then see the gang, about to dispose of the steadfast heroine, converted to shapeless stone figures (upon which Sanders’ limousine enigmatically turns up on the scene)…

As I said, the film is best described as a horror comic – but its true mainstay is a great rock soundtrack by John Cameron (complete with an acoustic folk-hero-type anthem to the leader of the bikers!). By the way, while the film’s length is given as either 91 or 95 minutes, the print I watched ran for just 88: at one point, the image froze in mid-sequence (Sanders having been engaged in conversation with the protagonist now finds himself in the next room assisting Reid with her séance – thankfully, the “British Horror Films” website does supply at least some of the missing dialogue) and resumed some instances later!