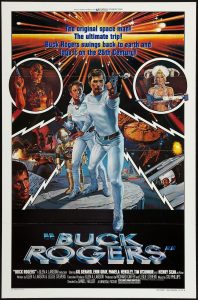 All-in-all, Buck Rogers was a fun and entertaining series. Given its episodic nature, the shows were somewhat uneven. The earlier episodes tended to be more interesting than the later episodes, but you could always count on a bit of fun. The series didn’t take itself too seriously, but also didn’t degenerate into farce (usually). It’s biggest problem was its lack of direction.

The show suffered from the same problem that most tv sci-fi shows (and most tv series, in general) have; it had no definite story to tell or ultimate destination. Each episode took you on an adventure, but with little link to previous or future episodes. Thus, the characters didn’t grow and the settings didn’t change. The show never seemed to decide how decimated the Earth was, or how advanced the rest of the galaxy was. In some episodes, the Earth is a wasteland, with a few sheltered cities. In others, it seems to be on par with the rest of the galaxy. There were few continuing plot threads, other than the cold war with the Draconian Empire. The attempt to find direction in the final season led to its downfall, mainly because the plot of that season had little to do with the first season.

Still, many episodes were quite fun; including “The Return of the Fighting 69th”, “Vegas in Space”, “Planet of the Slave Girls”, “The Plot to kill a City”, “Unchained Woman”, “Space Vampire”, “Flight of the War Witch”, and any with Kane and Ardala. The final season was completely forgettable, as were those with Gary Coleman.

Erin Gray was given a much larger role in the series, but still ended up as the damsel in distress. Twiki was annoying, but did provide some comedy. Pamela Hensley was still quite the vixen and Michael Ansara was a welcome change as Kane. There were many fine guest stars; with the likes of Roddy McDowel, Jamie Lee Curtis, Buster Crabbe (the original Buck Rogers and Flash Gordon), Peter Graves, Julie Newmar, Frank Gorshin, Ceasar Romero (hmmm, lot of Batman stars), Ray Walston, and Jack Palance.

Overall, the series was quite fun; but stick with the first season, and mainly the first half of it.