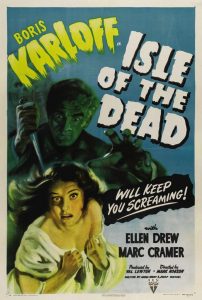 Plague victims are dropping like flies in this somewhat sluggish, Mark Robson-directed entry in the Val Lewton horror cycle. This one isn’t as well-written as the earlier films in the series, and the isolation, while nicely suggested psychologically, fails to cast the spell of hopelessness and despair it ought to. The movie is too genteel to be frightening, and lacks the fine tuning of a director like Jacques Tourneur, who surely would have made more of it. Boris Karloff is quite good in the “lead”, however, and the supporting cast is competent if unexciting. By today’s standards, there’s not much to be scared of here, and though it works up a nice head of steam near the end, it succeeds more as a mood piece than a horror tale.