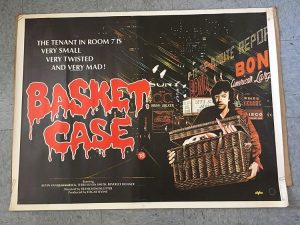 Frank Hennenlotter’s “Basket Case” highlights the problem with horror films of today. Back in the eighties, films would be made with an idea and no budget, and the result would nearly always see the release of an inventive and interesting horror film. Basket Case is no exception to this, as despite hokey effects, a rather silly story and some very suspect acting; Basket Case is a trash classic all the way, and it’s a film that’s guaranteed to delight fans of horror. The story capitalises on the fact that many people (including yours truly) find the subject of deformity uncomfortable, and the subject of living with it even more so. The plot follows a strange young man that carries a basket around with him. Inside the basket lies his hideously deformed Siamese twin, and the deformity wants it’s revenge!

This leads the two brothers to seek out the doctors that separated them and brutally butcher them, and delivering us with a great camp horror movie! The central creature – namely, the deformed brother, is a masterpiece of creature design. The thing itself looks ridiculous, but in spite of this it actually manages to be quite frightening, and once you’ve gotten over the initial giggles: it takes on a life of it’s own, and even manages to become quite believable. The film is sufficiently gory, which will no doubt be good news for everyone that wants to see it. Frank Hennenlotter is one of those directors that obviously has talent and flair for making films, but also hasn’t been given a real chance to realise it. It’s a massive shame that the endless amounts of remakes continue to get released on huge budgets, while someone that could make a great movie is blessed only with chicken feed to make them with. Just wait until the part where the brothers’ story is told – that’s inventiveness for you! One thing I do love about the director is the way he casts his lead; the one here is certainly odd enough, in a naive loser sort of a way. On the whole; fans of intricate, deep cinema should stay well clear – while everyone else is preparing themselves for a damn good time!