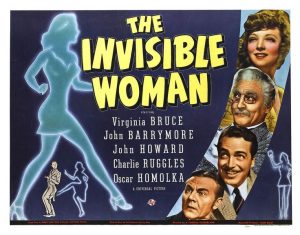 They are all here in this female version of The Invisible Man. Actually, as stupid as it can get, it also provides a number of funny scenes so I guess it served its purpose.

It’s only 73 minutes long, but it should have been shorter as the gags wear thin after 40 minutes. Ruggles almost steals the show as the butler. He provides most of the humor in a real slapstick manner. As in a lot of these old comedies, some of this stuff is really corny but I did laugh out loud at a couple things.

Bruce and John Howard are attractive leads and Barrymore is effective as the typically-portrayed-in-classic films eccentric scientist. It was also fun to see Shemp Howard, of Three Stooges fame, play a gangster, although a Stooge-like goofy one.

The special effects were good in their day but not now. In fact, the DVD is sharp enough that you can see the outline of Bruce’s head when she’s supposed to be invisible!