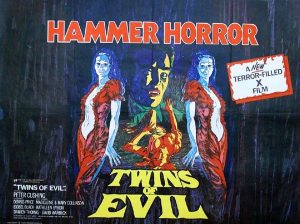 In my opinion a Hammer Vampire Classic. It’s early 70’s, so Hammer Studios are mixing blood sucking with naked buxom wenches. Prior to this, punters had to be content with heaving bosoms, rather than the full monty.

This is the 3rd part of the Karnstein Trilogy, with Vampire Lovers and Lust For A Vampire being the other movies in the series. They are all a similar take on the same story – Vampire Lovers has a lesbian flavour, and Lust For A Vampire is set in a finishing school for girls. All have the Karnstein family as the predatory vampires in one form or another.

Twins Of Evil has Playmates Mary and Madeleine Collinson in the title roles, the twist being one is good and one evil. The evil one is drawn to the roguish Count on the hill, and falls prey to his blood-sucking tendencies. Meanwhile, Uncle Gustav (Peter Cushing) is hunting down suspected witches in a puritanical fervor, leading to him doubting the purity of his twin nieces. Satanic undertones and a love interest with handsome Anton Hoffer are thrown in to keep the movie rolling along.

Hammer Horror Films are always full of great sets, costumes and stirring music (usually re-used from the previous five movies) and this scores high on all three. The Collinson twins are better Playmates than actresses, but fill their parts and costumes magnificently. Peter Cushing had just lost his wife, and his acting has a harder edge to it than normal – perhaps due to this sad loss.

Anything from the 70’s is going to look a bit dated now, but I think that Hammer got the Gothic feel and sex-horror mix about right with this fine outing. It’s a Midnight Matinee vampire romp that should not disappoint.