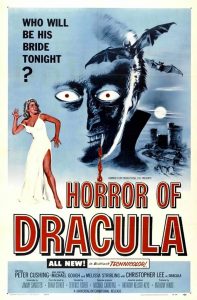 It’s difficult to overestimate the significance of Dracula. Far more so than its predecessor, The Curse of Frankenstein, it set the tone for Hammer’s movie output over the next two decades – the two decades (1956-1976) when British films, or at least British horror films, were among the best, most admired and most imitated in the world. A far cry from the terribly English whimsy of the Thirties and Forties, or the provincial, “arty” stuff that’s predominated since the end of the Eady levy in the 1980s.

With this movie, Hammer not only created an international star out of Christopher Lee, but a worldwide phenomenon that persists, in series such as Buffy the Vampire Slayer and films like Sleepy Hollow, to the present day. Taking the Kensington gore quotient of The Curse of Frankenstein, and combining it with an unprecedented dose of eroticised violence, Dracula revolutionised horror, ultimately leading to the breasts and blood exploitation movies of the Seventies, as well as the heavy sexual overtones of films such as Alien and The Company of Wolves.

The movie benefits from two astonishing central performances. Christopher Lee’s Dracula is a creation of passionate intensity, to whom Cushing’s monomaniacal Van Helsing is the antithesis – fire and steel; hot-blooded animal instinct versus cool scientific rationalism. This has led some critics to identify Van Helsing as the real villain of the piece, a brutal fanatic who coldly pounds a stake through the vampirised Lucy. Either way, both actors give supremely effective performances. The final confrontation between the two remains the single most iconic scene in any Hammer film. Hardly surprising, given their on screen charisma, that Lee should reprise his role six times and Cushing four.

The most influential British movie of all time, Dracula’s electric mix of sex and death fuelled a global revolution in genre film-making, and presented Hammer with a formula that they would return to again and again over the next two decades.