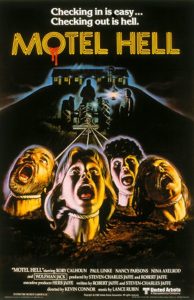 The distinctive taste of Farmer Vincent’s (Rory Calhoun) prime meats is renowned in the farmer’s rural area. In fact people come from far and wide to sample his uniquely delicious meat treats. The only real question is why is there rarely anyone staying in his nearby motel and yet the `No Vacancy’ sign is usually on?

‘Motel Hell’ is a fun and somewhat graphic parody of films like ‘The Texas Chainsaw Massacre’ (1974) and ‘The Last House on the Left’ (1972). By sparingly using shock tactics and graphic effects, ‘Motel Hell’ plays up the more satirical aspect and keeps the viewer interested and entertained. In fact, the movie easily equals the number of shocking moments with a variety of funny and charming sequences which range from heckling televangelists to a hilarious send-up of the lives of swingers. Viewers of ‘Motel Hell’ can be treated to a chainsaw duel (possible influence for ‘Texas Chainsaw Massacre 2′), a garden of humans being prepared for harvesting, cannibalism and a particularly stomach-churning conversation about smoking dogs. This movie is without a doubt one of the most underrated movies of its era and while not being as effective, or enjoyable, as ‘Re-Animator’ (1985) and ‘Evil Dead 2′ (1987), it remains an intelligent, gruesome and witty horror/comedy. Unfortunately the movie tends to drag a little shortly before the final sequences which can be slightly off-putting. However, the highly enjoyable and eventful ten minutes more than make up for this brief lapse and round the film off almost perfectly.

Rory Calhoun, without a shadow of a doubt, steals the show with his portrayal of the deranged yet surprisingly pleasant Vincent. Some adept scripting from Robert and Steven-Charles Jaffe give his murderous character a somewhat pleasant and appealing personality. The viewer can only laugh at the God-fearing persona that Vincent possesses as he talks about the creative and artistic way he catches stray humans to mix in with his meat. Rory is brilliantly accompanied by Nancy Parsons in the role of his overweight and slightly dim-witted sister Ida. One could even question whether Ida is supposed to be a female and slightly more intelligent version of TCM’s Leatherface. The rarely seen and beautiful actress Nina Axelrod is also delightful in her role as Terry, a young woman who was caught in but survived one of Vincent’s devious traps. Unfortunately the scripting for the character of Terry was rather poor and it becomes hard for the viewer to connect with her. However, given the material she had to work with, Nina put in an impressive performance and when required, added greatly to the humorous aspect of the movie. One cannot also neglect to mention Paul Linke who plays Vincent’s (much) younger brother Sheriff Bruce Smith. Linke’s performance, although the weakest of the main actors, is still enjoyable and provides both a villain and a hero in one.

Kevin Connor’s direction was of a particularly high standard although it seemed basic during the opening portions of the movie. Connor managed to capture the devilish yet fun atmosphere of the script and worked in all of the clever references to other movies seamlessly. These references (in addition to those already mentioned) included a captivating comedic illustration of ‘Night of the Living Dead’ (1968) and Zombie Holocaust which was released in Italy earlier the same year. ‘Motel Hell’ is probably worth watching for horror/comedy fans; though do not expect another ‘Evil Dead 2′. Thanks to some usually good scripting, above average performances and some truly side-splitting situations, ‘Motel Hell’ succeeds at what it sets out to be – great fun for cheesy horror lovers!