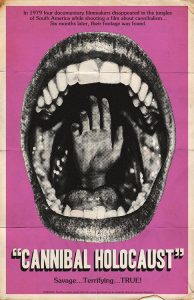 They say there is a fine line between genius and insanity and I think in ‘Cannibal Holocaust’ director Ruggero Deodatto made that line as thin as possible. To call this movie depraved and sick would only give it half the credit it deserves because ‘Cannibal Holocaust’ is meant to be sick as it shows how sickening our own society is but in the most morally corrupt way imaginable. Featuring numerous repulsive acts such as a real live turtle flaying, a foetus being ripped from a woman’s body, rape, castration and impalement the film sets about to portray the `civilised’ documentary filmmakers as no better than the primitive cannibals. Even though the actors are barely competent enough to do their job it becomes almost enjoyable (in a very sadistic way) to watch them suffer at the hands of those they have wronged. However, from a moralistic standpoint even watching this movie is wrong.

I don’t think this is the type of movie you either love or hate on an entertainment basis but you either agree or disagree with how it presents its case. ‘Cannibal Holocaust’ is certainly nothing short of an endurance test in viewing as the senses are raped by the foul imagery constantly portrayed within. Filmed on a shoe string budget with virtually no production values evident, ‘Cannibal Holocaust’ has a disturbing realistic grittiness that is almost unparalleled by any other movie and a huge influence for ‘The Blair Witch Project’ almost twenty years later. I feel that because the movie is so badly made and the very fact it was produced is more damning to society than the events portrayed within many people feel that it is nothing more than a senseless bloodbath with no redeeming features and a hypocritical storyline – and to an extent they are probably right! Whether the viewer appreciates or despises this movie is totally dependant on the viewer and it is unfair for anybody else to make judgements on that person based on their opinion of this movie.

‘Cannibal Holocaust’ is not about a sharp storyline, great acting or superb special effects (though the unsimulated effects are generally good). Instead it is about humanity in general. If you believe you can cope with violent and repulsive imagery and scenes of unbelievable cruelty then go ahead and watch it but otherwise it is certainly one to avoid. Some people will probably find the moralising over such repulsive subject matter offensive and I can’t say that I blame them. However, there is a message there and this movie makes an extremely bold statement. The question is though whether it was right to make the statement in this way? From an artistic standpoint it holds no real value but remains an interesting movie.