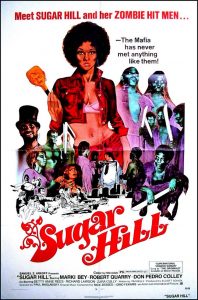 When her boyfriend is brutally murdered, after refusing to be shaken down by the local gangsters running their protection racket, Sugar Hill (Marki Bey), decides to call upon the help of aged voodoo queen Mama Maitresse; Sugar entreats her to call upon Baron Zamedi, the Lord of the Dead, for help in gaining a gruesome revenge.

Whether or not this is a blaxploitation horror film, I have no idea. There is definitely a theme of the black heroine (a poor man’s Pam Grier) taking on white crooks. And the police detective has a pretty impressive fro going on. But the line between blaxploitation and a film that just happens to have black stars is a blurry one in the 1970s…

What I do know is that this is a fun picture from Sam Arkoff and AIP. Not particularly scary and never taking itself too seriously, we get about half a dozen people attacked (one at a time) by a zombie horde. And these are real zombies — the voodoo kind — not those flesh-eating zombies that have taken over the horror world today.

Not the best film, not the worst, but definitely one that probably gets overlooked too often and is worth a peek for those who are into the voodoo zombies and already saw the bigger name films like “White Zombie” or “Serpent and the Rainbow”. I get the impression that this film was an influence on Adam Green’s “Hatchet” series, though that may just be my imagination.