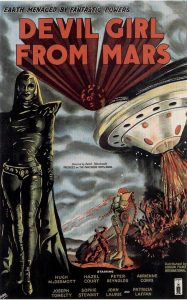 This is the earliest film I know of with aliens seeking Earthlings for breeding stock. It is played perfectly straight. Naya (Patricia Laffan) is an emotionless Martian space explorer. She has the Michael Rennie role here, but she is not visiting Earth for reasons that will benefit mankind. Still she is beautiful and her black leather costume and “Ming the Merciless” helmet must have caused quite a sensation back in 1954.

Like Rennie she arrives in a flying saucer with a robot. The saucer looks interesting but Chani the robot looks like a mailbox with a hood ornament.

It’s one of a handful of 50’s English science fiction films. It’s real claim to fame is that it’s the adaptation of a radio play. All the action (and there is not very much) takes place on the moors of Scotland and involves a varied collection of Earthlings staying at the remote Bonnie Charlie Inn whose proprietress speaks the immortal line: “While we’re still alive, we might as well have a cup of tea”.

Actually the film is not nearly as bad as its reputation. The film stock is excellent (at least judging by the 1990 Rhino VHS release) even if it does rely too much on wide master shots, with beautiful Hazel Court as one of the guests a few close-ups would have been nice. The production design and the special effects are more than adequate for the period of the film.

As a radio play the story by necessity adopts the remote house with an unlikely group of strangers dynamic. But it explores new territory by making a woman the invincible extraterrestrial visitor. She is a woman from a planet of women who indulges herself and the viewer with lengthy very humorous lectures on the inferiority of Earthlings. And she even expounds at length about the fusion reactor (probably films first reference to this) that powers her ship.

0 18
Extraterrestrial is a cheap and cheerful B-movie