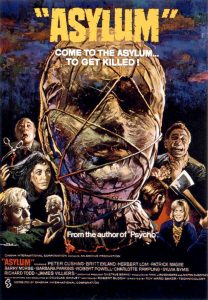 Linking story: this was one I had for some reason missed out on a number of times on TV, and I’m certainly glad I’ve watched it now in this definitive DVD edition; it has perhaps the best linking narrative of the three Amicus anthologies in the set, with Moussorgsky’s “Night On Bald Mountain” music (to say nothing of a remarkable sequence of shots where the protagonist, and us with him, is mesmerized by a number of disturbing illustrations that are lined up on the walls along the asylum staircase) effectively setting the scene for its rather weird psychological concept that someone can ‘hide’ in the person of another (actually recalling the original story that THE THING FROM ANOTHER WORLD [1951] was based on, though I wonder how intentional this was…then again, John Carpenter’s 1982 version was still ten years away, so perhaps Robert Bloch thought that an idea discarded by Howard Hawks was certainly good enough for him!); anyway, the cast is pretty strong even for a mere ‘device’ such as this sequence appears to be (alas, the one with John Bryans and John Bennett for THE HOUSE THAT DRIPPED BLOOD [1970] doesn’t quite cut it in comparison though, as in that film, the fourth story here is effectively integrated with the scene-setting narrative), led by a fresh-faced but credible Robert Powell, a surprisingly subdued Patrick Magee and the characteristically Machiavellian figure of Geoffrey Bayldon.

“Frozen Fear”: while no one individual episode particularly stands out from the rest, all are played for what they’re worth by a succession of fine performers starting with Barbara Parkins, Richard Todd and Sylvia Syms in the first story; the central idea of dismembered limbs taking a life of their own is preposterous really (though I guess it can be explained by the mystical amulet worn by the Sylvia Syms character) but quite cleverly done actually (and it’s certainly not a first – or last

for Amicus themselves); it does, however, give a distinctly
surrealistic flavor to the scene that kind of offsets its inherent grimness and sensationalism.

“The Weird Tailor”: the second story is also the longest and, in a way, most effective one; Barry Morse dominates this segment as the pitiful tailor asked by the mysterious and typically fussy Peter Cushing (who gets a memorable entrance here) to make him a suit from a rare and very special fabric; the center-piece takes place in Cushing’s mausoleum-like mansion, where the grief he shows over his dead son is all too real for the actor himself – having lost his beloved wife of many years only a few months before (in fact, I’m surprised Cushing accepted such a role); the final twist is quite effective, and also looks forward to the fourth episode in the film.

“Lucy Comes To Stay”: there is some consternation regarding this segment because it is said to slow down the film (allegedly it was originally intended as the opening story but producer Milton Subotsky changed the order of the scenes in Robert Bloch’s script around) but I really didn’t feel that it affected the overall pace of the film in any major way; if anything, it’s the most ‘realistic’ of the four episodes (preceding the last, and perhaps most fanciful, tale) with fine performances by all concerned but especially, of course, Charlotte Rampling and Britt Ekland – whose relationship to one another (misleadingly hinting at lesbianism throughout) is a bit too close for comfort; the final revelation is not particularly startling in this case, but subtly handled nonetheless.

“Mannikins Of Horror”: its ‘soul transference’ concept tying up to a degree with the main idea of the film, this bizarre installment is taken as far as it can go without crossing the boundary into the ridiculous; the robots on display here are clumsy, unattractive machines but their ‘supernatural’ connotations (echoes also of the superb “Sweets To The Sweet” story from THE HOUSE THAT DRIPPED BLOOD) certainly make for an effectively nasty climax, and Herbert Lom is persuasive in his small but incredible role; as in THE BEAST MUST DIE (1974), by the end we have to guess the true identity of one of the characters we got to meet during the course of the film – this one is not too difficult perhaps, but the sudden burst of violence that it produces (not to mention an ironic conclusion) gives the whole an unsettling power that is hard to shake off!