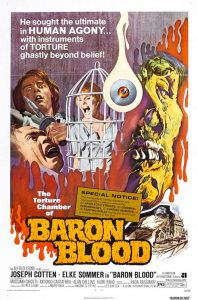 The closet thing to a remake of Mask of Satan(1960) that Mario Bava ever did was this film. The plotline is the opposite of Mask of Satan(1960) where in this film the witch is not evil. Gli Orrori del Castello di Norimberga/Baron Blood(1972) is an atmospheric supernatural thriller with marvelous cinematography and some good scare scenes. The main source of inspiriation for Baron Blood(1972) is Antonio Margheriti’s The Virgin of Nuremberg(1963). Its interesting that Baron Blood(1972) takes place in the birth country of Adolph Hitler. Baron Otto Von Kleist seems to symbolize the atrocities committed by the nazis during the mid 1930s to mid 1940s.

Mario Bava did Baron Blood(1972) right after the controversial blood letting of A Bay of Blood(1971). Baron Blood has some gore scenes but without frequency and show stopping manner of Mario Bava’s previous film. Baron Blood was the first and only time that Mario Bava did a film away from home as he didn’t like to leave Italy. The music by Stelvio Cipriani is very good. The chase scenes in the film are some of Baron Blood’s most exciting scenes. The death of Fritz is a reference to La Maschera del Demonio(1960) and Sei Donne Per L’Assassino(1964).

Elke Sommer doesn’t do much in the role of Eva but she does look arousing in short dresses and mini skirts. Elke Sommer would give a much better performance in her next film for Mario Bava called Lisa E il Diavolo/Lisa & the Devil(1974). Joseph Cotten’s performance as the evil Baron Otto Von Kleist brings to mind his role as the “Merry Widow Murderer” in Alfred Hitchcock’s Shadow of a Doubt(1943). Baron Blood(1972) is not in the same league as the best of Bava’s supernatural films such as La Maschera del Demonio/Mask of Satan(1960), La Frusta E il Corpo/Whip & the Body(1963), Operazione Paura/Kill Baby Kill!(1968), and Lisa E il Diavolo/Lisa and the Devil(1974) but is still better than any horror film from Hollywood from the 1990s til now. The set designs for the castle are excellent. The mysterious figure that appears on top of the castle at the end of the film gives me chills everytime I watch this movie.