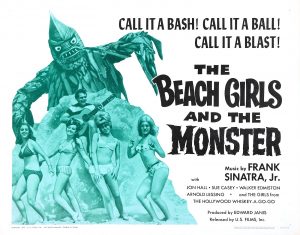 Frank Sinatra Jr had absolutely nothing to do with the soundtrack. It was recorded at BMI studios in L.A. in one evening by a band called the Illusions, from Riverside, CA. I played lead guitar, Monty Byrd played drums, Dave Phillips rhythm guitar, Mick Okleshen (an airman on active duty at March AFB) on bass, and Tom Burrell on Sax. There was also a studio musician playing trumpet and french horn. We were a typical high-school band playing for dances and parties, when Chuck Segal, connected to capitol records (how I could not tell you) put us on contract to make records after hearing a demo record we made in Cucamonga, CA, and carried all over LA to record companies. Kids who had a real contract!! We were thrilled, and of course, still inexperienced kids. Chuck called us into the LA studio to do the track while watching clips from the movie. We never saw the entire film until it played at a local drive-in theater. We were told that Frank Jr had actually written one of the many different songs we played throughout the movie, but they thought using his name in the credits would ad at least some credibility to an otherwise delightfully sleezy film. We had to do it at night, because it was during school. We had to improvise various generic riffs to fit the scenes, including the “creepy” guitar sounds when the monster appears (that’s me on my Fender jaguar), as well as the beach party, the car crash sequence, and several other scenes. We never were paid anything, but Chuck did take us out to a Chinese place not far away for a free meal sometime after midnight, when we finally finished. Sometime after that we did spend another evening making a demo of a song called Clare De-Lune (sp?) but in a guitar double-picking surf music style, similar to what Dick Dale made famous. Everyone used to tell me I could actually play better and faster than Dick, but I did not have the unique “sound” he could produce because he played a right-handed guitar left-handed, but upside down, with the strings still in the RH order. I just thought a few people would get a kick out of hearing what really went on with the music. I found this site after “Googleing” the film title and was surprised anybody even cared enough to watch it, much less devote time to comment. It was fun, and the movie will always be great to me