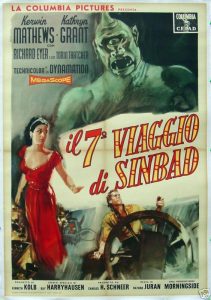 This truly action packed fantasy is as fun nearly 50 on from the time of it’s making. Out of the films that were produced by Charles H. Schneer and featured special effects by Ray Harryhausen, Jason And The Argonauts is usually named as the best [certainly that was the film where Harryhausen perfected his techniques],but Sinbad is not far behind. It’s far simpler but provides just as much entertainment. Of course some of the dialogue is a little hokey, but who watches films like this for their dialogue? Dialogue here exists simply to help propel the plot forward at as fast a pace as possible.

The amount of action scenes crammed into this less-then-90 min. film is astounding, and despite this the film still retains a delightful sense of wonder, as one wonders what fantastic creation will show up next. Yes, some of the matt work looks a bit poor ,and the creatures are a little jerky, but the design and execution of the snake woman, cyclopes, rocs, dragon etc. is still astounding for the time, and some sequences, such as the battle with the the first cyclops and the duel with the skeleton, are still very exciting.

Criticisms of the acting may be partially justified, but Torin Thatcher is as menacing a villain as one can wish for, and of course there’s also Bernard Herrmann’s extremely inventive score. Schneer and Harryhausen would later make two further Sinbad films, and there was a semi- remake several years later, Jack The Giant Killer. All three are fun, but none have the simple purity of this classic adventure.