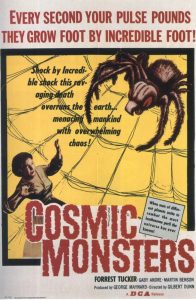 Of all the giant insects flicks of the 1950s, this is probably the worst. But as a low-budget sci-fi flick with a modest mystery, it’s not so bad. First, the good news: Forrest Tucker and others are conducting magnetic experiments, which leads to a problem: the experiments allow cosmic rays to bombard the land, resulting in giant insects, reptiles and spiders. And they’re all very hungry. A strange individual (Michael Benson) shows up to help. He’s from another planet, naturally. Now for the bad news: the giant insects and reptiles and whatnot are simply regular creepy crawlies poorly enlarged through the camera lens. The one exception is a spider that tries to eat the obligatory helpless heroine (Gaby Andre). There’s a bit of gore, but not enough to keep the kiddies away. Tucker is solid, as always, and Benson is oddly believable as the friendly alien. It has been suggested his performance was based on Michael Rennie’s alien visitor in “The Day The Earth Stood Still.”