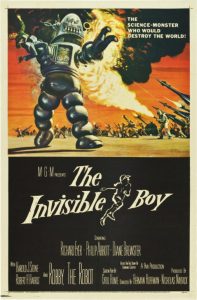 When we use the term nightmare we mean “bad dream.” And they certainly are. In every nightmare is the feeling of raw fear, more palpable and threatening than we’ve ever felt while awake. It’s a primal emotion and the heart of most bad dreams. But in truth there is much more to a nightmare… there is some good stuff. Some good, unforgettable, carnival-like, Lynchian, Felliniesque, wrong turns and back alleys of the unconscious. Alternate realities, non-linear consequences in a twisted universe where nothing makes sense.

When I say that “The Invisible Boy” is a perfectly realized nightmare I mean it in the best sense of the word. It was made in 1957 but taps into the primal fantasies of perhaps every boy in America up to the present. Timmie is a lad who doesn’t get the attention from his Father that he wants… what boy does? Timmie’s father is a scientist who’s too busy to play with the boy, too closed off to make an emotional connection, so he brings his son to his super-computer, passing off parental responsibility. After the computer brainwashes young Timmie, Dad allows the boy to play with a disassembled robot from the future(!) which is lying around his workshop. Timmie, guided by the evil SuperComputer, easily assembles and awakens the Robot who becomes the friend the boy has always wanted. Or is he? Turns out the Robot is only using Timmie as a pawn in a plan to take over the world using satellites. All Timmie wants is someone to play with.

Timmie is turned invisible, but his parents don’t seem to be alarmed. The Robot tricks the boy into a rocket and they take off to orbit the Earth and await orders from the SuperComputer that’s masterminding the sinister mission.

The most jaw-dropping moment of the movie for me was when Timmie, orbiting the Earth in the Robot’s rocket, comes out of invisibility and asks the Robot if they can finally play as he’s been promised all along. There’s a vulnerability in this dark scene that is at once hypnotic and heartbreaking. Could this be happening? Should we be watching this? Was this dark a picture really passed off as children’s fare in the 1950’s? God I hope so… the entire film plays like a fever dream, the fantasy of a boy who ate too much birthday cake and drifted off to sleep among the torn wrapping paper and party hats. It’s familiar and frightening… delightful but horrifying. There is a genuinely subversive feel to the proceedings…

Mind-bogglingly bizarre and strangely beautiful, this movie walks the line between childhood fantasy and the emergence of the technological being, of corny 50’s sitcoms and cold-eyed apocalypse. It presents the darkest fears of the nuclear age warmly woven into a family fable without a moral… even in the end the boy’s father is hypnotized by the blinking lights of the SuperComputer and urges his son to join him in surrendering free will and enjoying the glory of the machine, mesmerized by its blinking lights.

What else can I say? We’d be lucky to have nightmares this beautiful.