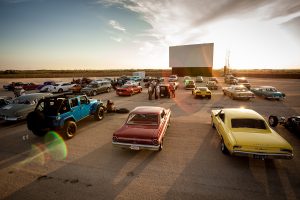 The Stars and Stripes Drive-In Theatre recently opened in New Braunfels, making it one of the largest drive-in theatres in the area.

I started writing this weekly essay as a result of my deep passion for the movie going experience. I have owned theatre, at one time a single screen and a drive-in. Owning a drive-in left a giant impression of me and led to to really think of the future of the movies. I love the movies….loved them since I saw a Topo Gigio short alongside Snow White And The Seven Dwarfs at the Astor Theatre.

I have seen the temples of movie going slowly close in the downtown’s across the nation. I have seen multiplexes come and go, then come again. I have seen digital cinema emerge and I have seen the studios begin to abandon movie theatres in favor of what they see as as quicker buck.

I am going to make a bold statement, I have previously stated that I believe deeply in community centric movie theatres and I think they are the best chance for small communities to maintain a movie going culture. I think globally that the best chance for cinema really to take hold again is in the propagation of and the re-establishment of the drive-ins. The drive-in is the best chance we have for a diverse and economically sane model be re-introduced into the cinematic food chain.

For a brief minute, lets take a look back at the history of the drive-in.

The earliest version of the drive-in dates back to 1921 when Claude V. Carver of Comanche, Texas screened silent films for the city downtown, with cars parked bumper to bumper to watch them. I personally think their were much earlier version especially in the open air theatres in Europe. It was young Richard M. Hollingshead, Jr. of Riverton, New Jersey who perfected and patented the idea. In 1932, the 32-year-old was working as a sales manager at Whiz Auto Products, a company owned by his father; but when he came up with the idea to screen films from cars parked in his driveway, he knew was on to something. He plunked a 1928 Kodak projector (I collect projectors and own the same model) on the roof of his own car, projecting the films themselves on a sheet hung between two trees in his yard, he subsequently applied for a patent during the summer of 1932 and was granted it on May 16, 1933. This would alter lead to some controversy.

Richard opened his first public drive-in, Park-In Theaters in Camden, New Jersey right near Philadelphia on August 6, 1933. He charged 25 cents per person, as well as an additional 25 cents per car. The first movie that was screened was Wives Beware. Soon after, other drive-ins began popping up across the nation .Not all of them were licensed. Since Hollingshead held the patent for the idea, anyone who opened a drive-in was legally obligated to enter a licensing agreement with his company, Park-Ins, Inc., including paying all the fees that would go along with it.

In 1949 some smart operator challenge the patent and the patent was overturned. Hollinghead’s idea was found “lacking any inventiveness.” Its layout, after all, was essentially the same as that of indoor cinemas, with the sole difference being that cars replaced the standard seats. The court stated that the patent should never have been granted to begin with ruled it invalid.

This ruling much like the Paramount Decree a year earlier caused an explosion in the movie business. The drive-in concept exploded. Throughout the ‘50s and ‘60s, it reigned as a king of family entertainment. The drive-in allowed families to enjoy a night out together, at the same time giving some young couples privacy during date nights. Drive-ins tended to play B movies, as opposed the big Hollywood releases. The audio was broadcast over AM or FM radio: Each car tuned its radio to the correct frequency, allowing for the easy and relatively inexpensive transmission of the film’s soundtrack.

But by the ‘70s, the drive-in began to go the way of all things. Many drive-ins had fallen into a state of disrepair; their lack of maintenance soon began to eat away at its reputation from a family safe destination. subsequently destroyed their reputation as family-friendly entertainment destinations…some blame the quality of the movies but in reality it was the cost of operation and maintaining the land became an issue. The properties that the drive-ins inhabited turned out to be far more valuable as shopping malls, gas stations and truck stops.

At their height drive-in movies numbered 4000, they now number 360.

As people begin to miss movie going, to miss the idea of watching movies in some form of communal fashion, the ideas of re-inventing and re-introducing the drive-in are being experimented with. Their are models which are emerging globally which should be closely paid attention to.

Outdoor moving going is nothing new in Australia. In December, when temperatures can reach in the 100’s the deck chairs, bean bags and picnic blankets come out and folks go to the movies. 60,000 people annually descend on the screenings at the Royal Botanic Gardens last year alone. Cult films, Hollywood blockbusters and old classics are enjoyed in in the cooling air of a summer’s night

Okay it’s hot and we can understand Aussies going to the movies outside. But cold, chilly England is another, temperatures in July are around 60 degrees and rain are not uncommon. Paying $14 or more to sit on hard grass and watch a movie you probably have seen before is theoretically less less appealings. But dear reader you are wrong…open air movie theatre are cropping up across England and having a huge success. Luna Cinema, the country’s leading outdoor movie company sees 20% growth year after year.Luna claims that open-air cinema is now a “staple of the British summertime”. This year’s movie choices has included screenings at an array of diverse locations: “Star Wars: The Force Awakens” at the Tower of London, “Pretty Woman” at Hampton Court Palace and “Harry Potter” at Alnwick Castle. Film4 Summer Screen boasts “London’s most beautiful open-air cinema” at the Neoclassical Somerset House. Like Luna , they too boast that outdoor film viewings are here to stay.

Some industry analysts are predicting that if the trend continues the box office from Open Air Cinema may sure eclipse traditional theatres.

I feel that the same approach can work here in the USA if drive-ins get off the studio merry go round and start being innovative in their programming. They also should be to promote the open air aspects and encouraging non-car centric experiences.

All these outdoor cinema have ignored the release patterns set by Hollywood. They make their own rules. Some of the parameters they use

Pay a flat fee for a movie or pay no more than 35% of the box office to the studios
Eventize the movie going by playing classics and retro program
Put a premium for sitting under the stars
Bring in arts programming and attract sponsors like wineries
Ignore the concept of a double bill.
By the way by my count ten new drive-ins are being built this year….nice to see.

It’s something to think about.