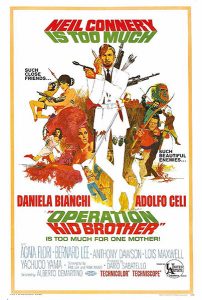 During the height of the original James Bond craze in the 60’s, there were a lot of rip-off films produced. High profile celebs like Dean Martin and James Coburn starred in light hearted Bond rip-off series. Existing characters like Bulldog Drummond and Modesty Blaise were co- opted into films that were more like Bond films. Even Bond material not owned by the folks behind the series got adapted into the terrible film “Casino Royale”. Still … trust the Italians to produce the most blatant rip-off of them all. This film stars a ton of actors from the Bond series … Lois Maxwell, Bernard Lee, Anthony Dawson, Daniela Bianchi, Adolfo Celi … and throws in Sean Connery’s young brother Neil to play the younger brother of “England’s greatest spy” who’s called into action when his brother is not available. The film’s not exactly good … in fact, I don’t think the plot ultimately makes much sense at all … but with all these actors from the series and surprisingly decent production values, it’s nowhere near as bad as you’d expect. The big problem with the film is the giant gaping charisma hole that is Neil Connery. It’s no surprise that only one brother became a star.