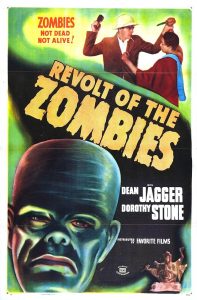 The Halperin brothers, responsible for the horror classic “White Zombie”, made this trite piece of garbage a mere few years later to cash in on its popularity and even recycled close-ups of Lugosi’s eyes from that previous film. There was a court battle with the “White Zombie” film’s rights owners, who didn’t want the Halperins to be able to use the word ‘zombie’ in this title. That word was the only thing that could help this film, because, as everyone knows, bad films can make much more money simply by having the word ‘Zombie’ appear in the title. Knowing what Victor Halperin was capable of a few years before only makes this uninteresting film more insulting. It seems he never directed another horror film after this debacle. The zombies here seem not to be true walking dead, but simply hypnotism victims.

Wanna create a mind-controlled army of zombies? Be ready to crack a few eggs, including your own.

Man falls in love with scheming woman who plays with his heart and becomes engaged to him only to make his friend, whom she loves, jealous. This sends man into a spiral of madness in which he tries using zombie mind-control techniques to change things to his advantage in an attempt to win over a woman who isn’t worth spit.

This includes one of the most blatantly obvious plot developments I’ve ever seen. You’d have to be blind or stupid not to see the ending coming. The acting isn’t even good. This movie makes the racially insensitive “King of the Zombies” (which appeared on the same double bill DVD I bought) seems like an atmospheric horror masterpiece by comparison and reminds us that not every black and white film is a classic. It makes the atomic age sci-fi alien zombie cheese fest “Invisible Invaders” seem like a serious drama. This is one big ball of cheese so ridiculously melodramatic it could probably make many a Korean film fan twitch (South Korean films are often known for their use of melodrama). The credits list the ironically named company Favorite Films. I’m not sure whose favorite film this would be, but they’re obviously an idiot.