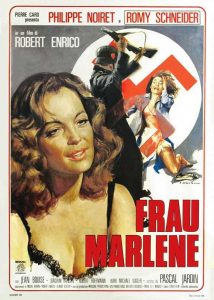 Strong War/drama set in France during WWII with marvelous main cast as Philippe Noiret and Romy Schneider . Montauban in 1944, Julien Dandieu (Philippe Noiret) is a doctor in the local hospital. Frightened by the Nazi army coming Montauban, and occupying the little town , he asks his partner Francois (Jean Bouise ) to led his spouse (Romy Schneider) and daughter in the back country villa where Julien owns an old mansion . Some days later, Julien decided to meet then for the weekend, but the Nazis are already taking the village and the castle . He turns into Revenger Angel when his family is attacked by furious Germans (Joachim Hansen , Robert Hoffman ) , as his wife is fired and daughter is shot. Then he stalks the Nazis and takes the law into his own hands, searching vengeance .

This exciting film contains romantic elements , brooding drama ,suspense , intrigue, thrills and lots of violence. Noiret is top-notch in a fully-formed main role as grief-plagued surgeon becoming avenger and he displays efficiently his old rifle killing mercilessly nasties .It’s certainly thrilling , though the morality may be questionable , even in this time, as the spectators were clearly on the Noiret-Julien’s side . It has a complex pace by means flashbacks in which are narrated the lovely relationship between the amiable surgeon and the attractive Romy Schneider . Colorful cinematography by Becker , being correctly remastered . Enjoyable musical score including a sensible leitmotif is composed and conducted by Francois De Roubaix .The motion picture is stunningly written and directed by by Robert Enrico . He was a good professional who directed interesting films as ¨Jailsbird vacation¨ , ¨Rum Runners¨, ¨The wise guys¨ and his masterpiece ¨The adventurers¨ and of course ¨The old fusil¨ . Rating : 7,5 , better than average. The film will appeal to French cinema lovers