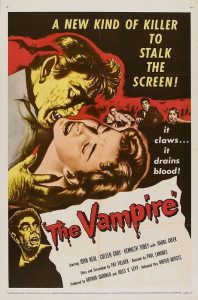 Dr. Paul Beecher, a respected small-town physician and all-around nice guy, ingests some mysterious pills given to him by his annoying daughter. It seems the li’l brat has foolishly mistaken them for his migraine medication! After Beecher develops a chemical dependency for the drug, he slowly realizes that he was responsible for a series of bizarre murders committed while he was under the influence of these pills. Apparently, these harmless-looking tablets have the power to make their user mutate into a hairy, bloodthirsty vampire at nightfall, leaving him with no recollection of what he has done after the effects have worn off. How could these pills be so powerful? Easy! Because they contain a chemical extracted from a vampire bat!!

This fun, fast-paced horror flick was made in that classic monster-movie style that we have all come to love, yet at the same time it has some very unique and clever twists. The vampire, who is played excellently by John Beal, really looks nothing like you’d expect. Rather than having the bloodsucker portrayed as the standard well-dressed, intelligent, and graceful DRACULA lookalike, THE VAMPIRE depicts him as a hairy, ugly, clumsy beast who ambles aimlessly after his targets. In my opinion, the interpretation of a vampire as being angry, primitive, and relentlessly brutal is much more frightening than the notion of a slick, attractive, intellectual vamp.

The characters in this film are eccentric, likeable, and very well-acted; and the special effects, although simple and outdated, are surprisingly effective. Despite the fact that THE VAMPIRE’s story may contain a few glaring inconsistencies, it still succeeds as a suspenseful yet down-to-earth creature feature.