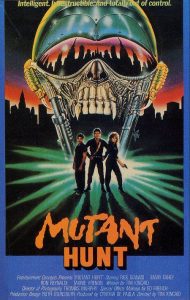 Some claim this is a BLADE RUNNER ripoff but I know the truth. In the distant future, failed filmmaker Ridley Scott built a time machine and decided to go back in time to film MUTANT HUNT, what many in this future consider the greatest film of all-time, before it is actually made. His plan worked and BLADE RUNNER hit in 82 while MUTANT HUNT’s legacy was muted because it was seen a ripoff.

Seriously, what can one say about this classic? It is indicative of a cinematic time long gone, the era of cheapo sci-fi flicks shot in abandoned warehouses (the future!) on a 5-day shooting schedule (see also: Ray, Fred Olen). I’m glad to know that in the future cyborgs will be modeled after the band Devo. Tim Kincaid directs this as flatly as possible. I love the fight in Riker’s apartment where the girls just sit and stand there. I also love the bit where the robot begins to severe its left hand. When the filmmakers cut to the hand hanging in the cuff, it is a right hand! And who can ever forget the couple making out in the alley? Awesome. To the film’s credit, Ed French’s cyborg puppet head is pretty impressive and actually emotes better than 3/4 of the cast. After watching this 75 minute insanity fest, the only natural thing to ask is, “What Kincaid film should I watch next?”

0 247
Behind The Scenes Of Abraham Lincoln