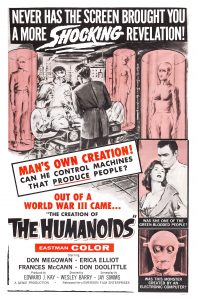 This is a wonderful, thoughtful little film with timeless messages about prejudice and what it is to be human. A lot of people comment on the low budget, but there were some A list Hollywood people involved in making this like the most famous make up man ever, creator of the Universal Frankenstein make up for Boris Karloff, Jack P. Pierce, doing wonderful work near the end of his career. The great and colorful cinematography is done by the famous Hal Mohr who has a star on the Hollwood Walk and a long list of credits. The screenwriter was Jay Simms who went on to fame and a long career in television, so this film is not without talent in the people who made it despite its low budget. The film is also a bit cerebral for some people, and does have a lot of talking in it, but like the best Science Fiction films and T.V. programs, like the Twilight Zone, THE STORY will make you think deep thoughts. You can’t say that about most big budget modern Science Fiction. I have a lot more respect for film like this, doing a lot with a little through the WRITING and the STORY than I do virtually any modern film whose story, if there is one, has been dummied down assuming no one in the audience has a working brain.

Much has been made about the fact that Andy Warhol loved this movie. It’s easy to see why given the wonderful colors, lighting, and almost pop art looking sets. Despite being cheap, the film is often a wonder to look at. It also has Dudley Manlove of Plan Nine from Outer Space in it. Do your self a favor and watch this film if you can find it.