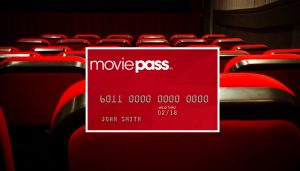 Companies whose branding that is primarily red , if Netflix has shown us anything is something that should give the movie exhibition business cause to pause. When I first heard of MoviePass, I thought to myself that this was wacky. This does not make a lick of sense, see a movie every single day in theaters, paying only a monthly fee that in some markets is much cheaper than a single ticket. I thought why are they doing this…..what is the end game? At first it was a real paradox, then it hit me…..and then it hit hard.

MoviePass was trying to own the movie going community

At 1.5 million members/subscribers and climbing it is now apparent that they really plan to capture and control that key segment of this, the frequent movie goer. While the theatre owners get full price for the ticket, MoviePass is walking away with a boatload of data. Right now 3 percent of all domestic box office gets purchased through MoviePass, what is striking is that the number jumps to 10 percent when MoviePass pushes a movie. What is also fascinating is that MoviePass is already taking contracts to promote certain movies and these contracts are pretty darned lucrative.

It is projected by the end of summer 2018 that the number of subscribers to MoviePass could reach 4.5 million. If numbers hold, this means 15% of all box office could be attributed to MoviePass and if they promote the movie, 30% of all revenue can be attributed to MoviePass. This is significant, imagine what happens if MoviePass enjoys a NETFLIX like growth. Right now, NETFLIX has 53 million subscribers in the USA. If MoviePass gets one third of that number, it will be the most significant player in the market, at its peak MOVIE PASS could have impacted up to 90% of the domestic revenue. This is huge and this is a big game changer.

Last week during Sundance, MoviePass announced that it was entering the business of distribution. It went and acquired the thriller American Animals for distribution. For our business this is a game changer. Here we have a company that is taking lessons from the NETFLIX playbook and is building a distinct and vibrant movie going community. It will be able to target what movies its audience likes, what movies its audience dislikes and how their influencer programs can impact box office.

The studio should be quaking in their boots because here is a company that can wield great power over the box office and can effectively extricate downstream revenue from the studios in return for the promotion of a certain movie. It also has shown that it can nimbly move from movie payment system into movie studio. This level of vertical integration is something the studios have longed for for years. Here you have a data company who realized that there was an opportunity to build communities of moviegoers prior to that community making an collective decision about a movie.

To paraphrase McLuhan, the medium of MoviePass and the transactions it facilitates is going define movie going in a major way.

MoviePass in a show of force has taken 10 AMC theatres out of the program. They claim that MoviePass represents 62% of those theatres revenue. This is war and it’s going to get bloody…very bloody AMC. This may be the final push for AMC and prompt a strategic withdrawal by WANDA DAILAN, majority owner of AMC Theatres.

In November 2017, MoviePass changed its terms of service to limit users’ ability to deactivate and reactivate the service at will, so they can’t limit their use to summers and the year-end holiday season. The company also offered an even more discounted rate if viewers were willing to pay upfront for a year. The bottom-line, through what amounts to a subsidy, MoviePass is taking pricing control out of theaters’ hands. That is just the start…it will soon take marketing control out of the studios hand. It will influence and demand apiece of the concession revenue, draw people to watch a movie at a certain theatre and in a particularly concerning turn of events, control the community that is attached to your theatre.

Supposedly MoviePass has assembled a war chest through its parent company, Helios and Matheson Analytics Inc. to exist for a period of time subsidizing America’s movie going experience. Cinemark is beginning to shape it’s own subscriber program, I strongly suggest that the Cinema Buying Group do the same for the independents. Only a strong alternative will thwart some of MoviePass’s plans.

There is something that I find troubling though, the majority owners of MoviePass is Helios and Matheson Analytics Inc., they build applications for major companies like Pfizer, MetLife, and Citibank. Their core business right now has 34 employees outside of MoviePass. It almost feels that they are building something for a third party, and building things for third parties is their business. My take on this is that a large part of this exercises is academic. If they do this to the movie exhibition business can they also do this for grocery stores. So I ask myself who could really use this business strategy and the resulting software back end to grow their business.

Netflix and Amazon have been going toe to toe to win the hearts and minds of the video on demand world. Netflix is winning (I don’t know why), Amazon is becoming very aggressive with moves such a producing a series of Lord Of The Rings. It strikes me as very smart for Amazon to acquire MoviePass, then bundle the service with Amazon Prime and have a bundled price for both video streaming and going to the movies. This would ally its self with Amazon’s wish to have a movie economy within its control which goes from cradle to grave. It is project that 80 million American households subscribe to to Amazon Prime. A bundling of MoviePass and Prime would allow members would be able to not only watch Amazon Prime movies online, but also watch newly release at movie theaters across the United States through MoviePass. It also would allow Amazon to firmly overtake Netflix and maybe even allow them to acquire AMC.