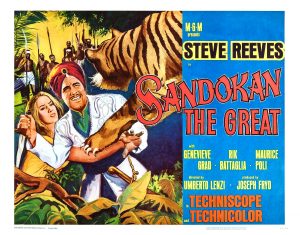 An effective jungle adventure yarn from one of Italy’s greatest cult directors – Umberto Lenzi, who would later go on to greater fame with his polizia and horror movies in the ’70s and ’80s. Here, his pacy direction keeps SANDOKAN THE GREAT interesting when it could be regarded as overlong, and a wealth of action and plot elements make the running time fly by. On top of this, the band of assorted leading characters are a well-developed bunch too, not just cardboard cut-outs as in many similar movies from the period, each with their own personality and character. The dashing hero is played this time around by genre titan Steve Reeves, effortlessly charismatic and athletic when the script calls for it, as Reeves displays once again the skills that made him a true legend in Italy.

The majority of the film’s running time is taken up by a huge jungle trek in which our heroes must fight many perils. The journey is interspersed with plenty of fights, shoot-outs, jailbreaks, and other action staples which are well-staged and always a pleasure to watch. Reeves’ party is fleshed out by a pretty blonde girl (played well by Genevieve Grad, although she doesn’t have a lot to work with), and minor parts for Wilbert Bradley and Dakkar Genre fans may spot seasoned performers Rik Battalgia and Superargo himself, Giovanni Cianfriglia, appearing in other minor roles. Leo Anchoriz ironically has the role of the stuffy British villain, Lord Hillock, but unfortunately is rather unmemorable.

Along the way, Reeves and his men must traverse treacherous bogs and poisoned swamp water, a surprise attack by a lethal tiger, an elephant stampede (done with stock footage, but still realistic), a tribe of head hunters who shoot and kill with their poisoned darts, and a traitor in their midst as well as avoiding all the British soldiers out to get them. The ending could have been a classic but is let down by some poor day-for-night filming which obscures some of the action, so it just remains great fun. Sandokan and his men perform a jailbreak and then proceed to massacre the British army in a large battle scene, the highlight of which sees a bloodied Reeves jumping on to a huge machine gun and cutting down dozens of the enemy. A good way to end what is a perfectly enjoyable little adventure romp, recommended to all fans of the genre.