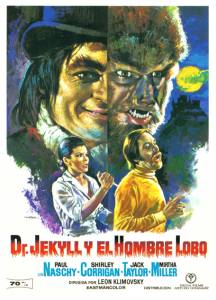 Paul of course is a werewolf with a witch sidekick and when this robber guy starts going on about revenge and involving the locals it doesn’t turn out right for anyone, as more villagers end up dead, the rest get out the pitchforks and torches, and Paul has to high tail it to England so the plot can get even more stupid. I also noted that for some reason one villager had a gigantic pitchfork that was much larger than the others. Must have been compensating for something.

Now Justine has quickly got over her husband being murdered and is in love with Paul, so she goes to Dr Jekyll to get him cured. In a plot move that makes virtually no sense whatsoever, Jekyll proposes that they inject Paul with some injection that will make Mister Hyde manifest in Paul (?) so that they can then isolate the evil in him and kill him. So not only has Paul got to put up with the werewolf stuff, now he’s turned into a sex-crazed hedonist too!

This might have actually worked out if Dr Jekyll didn’t have a jealous female sidekick who wasn’t happy with Jekyll trying to help out an unrequited love. Next thing you know Hyde is out rampaging around London, but then again you only get to see that if you have the uncut version as it involves ravaging hookers and whipping Justine.

Best thing about this film (apart from the crazy storyline) was that any time you started to think it would get boring – it didn’t! I thought things would slow down a lot once Paul got to London for his cure, but then, in the lift on the way up to his appointment, the lift broke down and trapped him with a nurse until the moon rose, causing a werewolf rampage! I love these films!