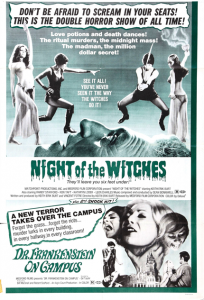 “Night of the Witches” is a psychedelic 70’s horror comedy about a lewd preacher who meets up with a coven of sexy witches.The main witch Cassandra often speaks with Jupiter in her colorful mansion.Very strange and somewhat surreal horror comedy with several truly bizarre characters.The character of preacher totally cracked me up.I enjoyed the main country song too.It goes like that “”He’s a man of many pleasures,He’s a man who’s got the time,He’s the man who told the preacher where to go-oh-oh…He won’t talk behind your back,He’s no ordinary jack,He’s a man of many pleasures,don’t ya know”.The lack of nudity is a bit of disappointing,but if you are a fan of 70’s weirdness grab the copy of Keith Larsen’s “Night of the Witches”