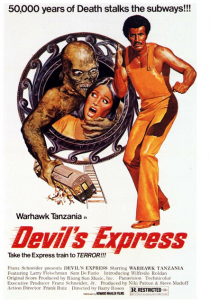 It starts out with a group of monks wearing orange robes carrying a tomb, with a head monk dressed in a black robe. They are away from the public eye out in a rocky woods area, walking through some trails until they get to their final destination where they lower the tomb to the ground, The monks in orange, surround the tomb, and begin some sort of a ritual, each kneeling and going into a meditative state chanting where they break out into a sweat. As they are doing this the head monk in black takes a sword and chops of their heads one by one showing a horrible display of fountains of blood shooting out the headless bodies. The head monk drags the tomb into a cave under ground and surrounds the tomb with the headless bodies. I always remember the chopping off the heads scene where each one of these monks that are meditating are well aware that they are going to be next to die as the camera pans over to each one as the others get there heads chopped off. Some were very reluctant as it showed on there faces and the sweat from fear. Like I said this was filmed very well.

It’s five years later and you see a cop that’s a martial arts expert training with his grand master in Hong Kong and then flying back to New York. Next the camera takes you over to the exact area where those murders occurred and into the cave. You see the decayed bodies still surrounding the tomb and all of a sudden a fist bust through the tomb from the inside. The purpose of the human sacrifices was to resurrect this demon form in the tomb and that’s exactly what happened. You see the arm and the fist bust out of the tomb. It was grayish yellow with a rotten look. Next you see this abomination making its’ way through the woods. You don’t actually see it but just a camera view of something monstrous moving through the woods disturbing nature with it’s presence as all the wild life birds deer’s and small animals all scurrying out of it’s path.

The demon makes it’s way into the city. The next thing that happens is that mysterious horribly gruesome murders take place in the subways of New York City. For instance a Chinese businessman is walking alone in the subway and all of a sudden he feels ill and starts to hemorrhage from his eyes nose mouth and ears arms. His eyes bug out into very large balls. This causes his him to scream and me to scream as well and wanted to leave the theater. I never seen so much blood and torture before. Eventually they find this man’s dead body. It’s taken to the hospital and to the morgue where law enforcement starts an investigation.

Another person gets killed by electrocution in the subway. A worker gets his head ripped off and later at night a subway car loaded with people discover the headless body which causes a mentally disturbed bag lady to go histerical in the subway car. Next a rapist takes his victim into the darker dimly lit area in the subway on a night where there isn’t any people to be seen. He knocks her down. He threatens her as she is crying and scared when all of a sudden the side walk starts to act as a conveyer belt with the rapist stuck to it, reeling him into the dark where there is no lights at all and he gets severed in half by a passing train. A very bloody and gory scene.

There are two cops trying to find out who is behind these mysterious murders they are both martial arts experts with the Star Warkawk Tanzania being the much better one and more of a leader with a strong minded dominant personality. He takes charge and leads the investigation of the mysterious gruesome subway murders. His girl friend is the next victim who gets killed in the subway. Warhawk thought it way the gangs the whole time but comes to realize that even the gangs don’t go into the subways at night anymore since the killings and that the gangs seemed to be the first to keep away from the subway. He figures that the Chinese gangs know what’s going on and the only way he is going to get anything out of them is to earn their respect. He goes into China town and confronts one major gang and it’s leader. They won’t answer any questions. He decides to take them all on using martial arts against whatever they know which is also martial arts. This is a deal he suggested to the leader that if he wins against all that he gets some answers. So he fights them and beats them even against their knives and other weapons in a very brutal vicious lethal display of martial arts more like Seagal than Jackie Chan.

A lot of breaking arms and stomping on this guys chest with one foot and at the same time pulling his arm breaking it. The guy throws up blood. This wasn’t your cheesy blood squirting out of the mouth seen that we are all use to in those silly Chinese martial arts movies It was done real well with a feeling of real horror as he is puking violently and looks real scared as if to say “what did you do to me”? It was real graphic and dramatic, but short seen. Then he takes on the Chinese gang leader. This guy was fairly good and he ends up getting beaten bloody and throws in the towel. He feels now that he has no choice and decides to keep his end of the bargain by telling the cop of this Chinese occult witchcraft store that he could get info from. He goes there and see this old Chinese man running the place. It was the same monk that killed those other monks dressed in Black. For some reason I don’t know why but he has a change of heart after the cop explains all that he went through and what has happened.

He feels that this thing really got out of hand. I guess it wasn’t supposed to venture off into the city’s subways killing people there. This is not what the monks plans were. He agrees to help put a stop to it and help the cop. He gives the cop some crystal magnetic medallion and told him that if he wears it he could have a chance against this demon because as long as he wears this medallion the demons telekinetic powers won’t work other wise he won’t have any chance at all. The demon would have to contend on a much weaker physical level. The cop feel that in this case he could kill it with martial arts or a gun knife etc. He goes down there in the subway and the duel starts out with this demon playing tricks on him to catch him off guard. For example. His dead girl friend sees him in the subway and comes up to him telling him that she really isn’t dead and that it was some sort of mistake or bad joke. Well, he really misses her and almost falls for it. She almost kills him before he shoots her.

This all takes place in the subway. I forgot to mention that his cop friend also gets mysteriously murdered earlier and also becomes alive and starts talking to him telling him that he wasn’t really dead just injured and of course he ends up fighting him because a knife is suddenly pulled. He kicks his friend hard and knocks him down and his friend morphs into two twins and he has to fight them. Finally the demon shows itself as it runs out of tricks. It looks like a reptile in human form standing on two feet with a grayish yellow rotten decayed surface skin texture to it. It lifts a heavy steel beam and throws it at the cop. The cop and this demon carnation begin a physical fight to the death.