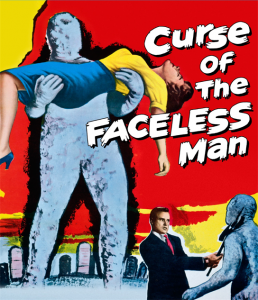 ndeed, the title character of this patently ridiculous schlock feature does not have a face. Incased in stone, he was a slave named Quintillus Aurelius in the days of ancient Rome, when Mount Vesuvius erupted and caused the destruction of the city of Pompeii. He’s discovered in modern times by archaeologists, and goes about crushing the skulls of people unlucky enough to merely be in his way. What he really wants to do is reunite with the long ago noblewoman he loved, who’s conveniently been reincarnated as the movies’ leading lady, Tina Enright (Elaine Edwards).

There’s nothing particularly special here, but undemanding fans of low budget genre fare could find enough to keep them interested. It’s cheaply made like so many other movies of its kind, and devotes too much of its time to exposition. There’s also some pretty silly but endearing narration, which was spoken by the great and prolific character actor of the period, Morris Ankrum. The characters are entertaining (bravo to Felix Locher as Dr. Emanuel; he really looks like he’s having fun reeling off that exposition). Edwards is a hell of a screamer, and both she and Adele Mara are definitely pretty ladies. Luis Van Rooten as Dr. Carlo Fiorillo and Jan Arvan as the requisite police inspector are solid. Richard Anderson is a jut jawed, decent enough hero as Dr. Paul Mallon, but man, oh man, is Paul a stubborn dummy. He remains hard headed and skeptical for too long.

In the end, this is an okay update of Mummy type stories, if not too memorable overall. Writer Jerome Bixby, producer Robert E. Kent, and director Edward L. Cahn truly hit paydirt with a subsequent joint effort, “It! The Terror from Beyond Space”, the movie that many people regard as the principal inspiration for “Alien”.